One of the missions of FBPE is to increase public awareness of professional engineering licensure. To that end, FBPE staff talks with students at colleges of engineering around Florida, as well as students at primary and secondary schools. 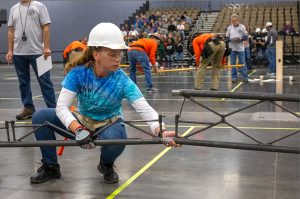 A member of the Florida Gulf Coast University steel bridge team works to assemble their bridge at the 2019 ASIC regional competition.

They also volunteered at the American Institute of Steel Construction’s regional Steel Bridge Competition, held this year in Knoxville, Tenn., in conjunction with the American Society of Civil Engineers’ Southeast Student Conference.

In addition to the universities, staff visited a science and math school in Tallahassee to talk about engineering during a career day, and volunteered at the state Mathcounts competition, which was attended by more than 300 middle school students.

FBPE Investigators Wendy Anderson and Trebor Raze and PIO Lampkin attended the Building Officials Association of Florida annual conference near St. Augustine, where they staffed a booth handing out information regarding unlicensed engineering activity and answering questions from building officials.

If you would like FBPE to talk about professional engineering licensure to your university engineering class, please contact William Lampkin at publicinfo@fbpe.org or (850) 521-0500, ext. 104.