FBPE Reaches Out to Educate, Inform

In the past quarter, FBPE staff participated in a number of outreach events for a range of audiences, elementary school students to government officials.

In late March, FBPE Executive Director Zana Raybon, joined by FBPE Assistant Executive Director Rebecca Sammons and Public Information Officer William Lampkin, talked about the benefits of becoming a licensed Professional Engineer to over 1,500 students at the University of Florida and the University of Central Florida colleges of engineering. In April, she did the same to engineering students at Valencia College and via a webinar to employees at AT&T. 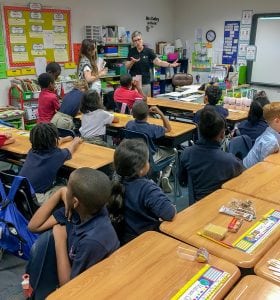 Ms. Raybon talks to elementary students at the Tallahassee School of Math and Science.

In May, Ms. Raybon was joined by members of the American Concrete Institute/American Society of Civil Engineers/Florida Engineering Society Student Chapter at the FAMU-FSU College of Engineering for the 2018 Kidsfest in Tallahassee. For the 18th annual event organized by Kids Incorporated, Ms. Raybon handed out STEM activity sheets, color-changing FBPE cups and other goodies to kids and their families, while the engineering students helped kids explore engineering by working with them to construct a bridge using only interlocking wood strips.

Later that month, Ms. Raybon gave a series of short talks to kindergarteners and elementary school children at the Tallahassee School of Math and Science explaining what an engineer does and encouraging the students in their STEM studies.

In June, FBPE Investigators Wendy Anderson and Jeannie Jones attended the Building Officials Association of Florida annual conference in Orlando, where they staffed a table handing out posters regarding unlicensed engineering activity and answering questions from officials.