Centennial Celebration: Early History of the Florida Board of Professional Engineers 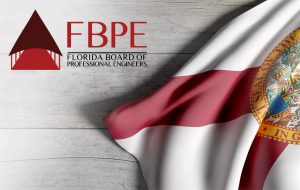 Following the Civil War, this nation saw a major expansion in growth and development. Accomplishing this growth meant the construction of many engineering works which included numerous railway bridges and dams, of which many failed. Although a number of prominent engineers of that era acknowledged the need for policing unqualified practitioners, they resisted the enactment of laws that would regulate the profession. They recognized that such legislation would involve the political spectrum which could possibly result in the loss of control of the engineering profession by qualified engineers who had the appropriate education and experience to practice engineering. As the 19th century gave way to the 20th century, the situation was rapidly becoming worse.

In 1907, Clarence T. Johnston, State Engineer of Wyoming, voiced his concern that lawyers, notaries, and others were making maps for state water use permits and signing them as surveyors and engineers. Working with other engineers, a bill was drafted and later in the year legislation was enacted by the Wyoming Legislature, thereby becoming the first state in the nation to license engineers. In 1908, Louisiana became the second state to enact similar legislation; however, both of these acts regulated only certain areas of the engineering practice.

Just a few years later in 1916, G.R. Ramsey, City Engineer of Orlando, wrote to J.R. Benton, Dean of the University of Florida, College of Engineering, advocating for the formation of an engineering society. At that time, there were relatively few engineers in Florida, and they did not have high profile visibility. For instance, Duval County did not have a full-time engineer, while the cities of Tampa and Miami had no engineering employees to plan or design engineering facilities. Because of situations like these and others around the state, there was agreement by many of the engineers within the state of the importance to form an engineering society to help remedy these situations. Dr. Benton undertook the task of forming such a society and in December of 1916 the Florida Engineering Society (FES) held its first meeting in Jacksonville.

The engineering leadership in Florida recognized early the natural attractions of the area and envisioned the state’s enormous potential for rapid growth, a process which was then underway as a prelude to the “booming twenties.” In 1916, Florida’s infrastructure was in its infancy and in many instances being carried out by unqualified individuals. As mentioned above, licensing of engineers was taking place elsewhere in the country. Therefore, it was generally conceded that regulation of the engineering practice was highly desirable in both the interest of the public and the profession.

The pragmatic element of the leadership group of the newly formed FES recognized that the nature of legislative politics was such that it would be difficult to pass an effective statute regulating the engineering practice without the backing of a statewide organization of experienced practitioners. It was, therefore, no coincidence that during the first FES Annual Meeting held in Tampa on Feb. 2-3, 1917, a legislative committee was appointed to draft a bill to create a State Board of Engineering Examiners. This legislation was introduced in the state legislature and in May 1917 it was enacted into law as Chapter 7404 of the Florida Statutes, thus becoming the first all-inclusive engineering licensing law in the nation.

The new law regulating the practice of engineering in Florida required that after Jan. 1, 1918, no engineer shall practice “Professional Engineering” within the state of Florida, as defined in the new law, unless he or she have been registered by the Board as a Professional Engineer. Upon passing an examination conducted by the Board, the Board issued each applicant a certificate authorizing that applicant to practice professional engineering. The following is a list of the first 10 engineers registered in Florida along with their license numbers:

Kenneth Todd is a licensed Professional Engineer in Florida. He retired as water resource manager for Palm Beach County where he was responsible for coordinating water-resource efforts with county department and other government agencies. Mr. Todd is serving his second term on the Florida Board of Professional Engineers and is Board Chair for 2018-19. The author would like to thank Don Ditzenberger, PE, FES Historian, for providing some of the material used in this article.