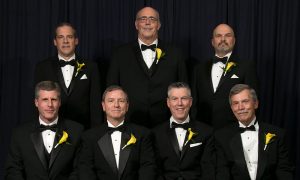 The NCEES 2017-2018 Board of Directors. Front row: Rickborn, Purcell, Tami, and Turner. Back row: Hanson, Bowersox, and Knotts. Not pictured: Tyrell.

A resident of Roseville, Calif., Tami was a member of the California Board for Professional Engineers, Land Surveyors, and Geologists from 2006 to 2016, and is now an emeritus member. He replaces outgoing president Daniel Turner, Ph.D., PE, PLS, of Alabama, who will remain on the NCEES board of directors as immediate past president.

NCEES welcomed Christopher Knotts, PE, of Louisiana, and Paul Tyrell, PE, PLS, of Massachusetts, to its board of directors as well. Knotts and Tyrell will serve two-year terms as vice presidents of the Southern Zone and Northeast Zone, respectively.

Rounding out the board of directors are two members serving the second year of their two-year terms: Maurice Bowersox, PE, of Kansas, returns as Central Zone vice president; and Brian Hanson, PE, of Alaska, continues as Western Zone vice president.