“Carve your name on hearts, not tombstones. A legacy is etched into
the minds of others and the stories they share about you.” — Shannon L. Alder 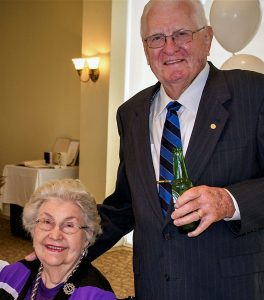 I lost a long-time friend and mentor in September. Henn Rebane was a champion for engineering throughout his more than 60 years in the profession. He came to this country as a refugee from post-World War II Estonia. He earned a Bachelor of Science in Electrical Engineering from Georgia Tech in 1956.

He went on to serve as president of Consulting Engineers Council of Florida (CEC/F), Florida Institute of Consulting Engineers, and Florida Engineering Society; a national director in the National Society of Professional Engineers; a member of the Florida Engineers Management Corporation; a member and chair of the Florida Board of Professional Engineers; and as president of NCEES.

I don’t know of anyone in Florida who gave more to our profession. He was a giant in both stature and in accomplishment, and it is fitting that he be honored for his service. But dedicated and consistent service is not what this article is about. This is a story about legacies.

I first met David Ludovici in 1973 as a summer intern at Ludovici & Orange Consulting Engineers. I stayed on with L&O during my senior year at the University of Miami. I had a heavy course load that year, but I needed the income to help with my tuition. Dave had been active in FES, having recently served as president. He encouraged me to apply for the John Bedingfield Scholarship, a $500 award offered by CEC/F. I know now that Henn Rebane was president of CEC/F at that time. I was selected to receive that scholarship. Every little bit helped.

Dave died in 1996. He was still an active employee at the time of his death, although I had taken over management of the firm eight years earlier. He was as proud of his profession as anyone I had ever known. He continued to be involved in FES and NSPE as long as he was physically able, serving on numerous committees, as Florida’s delegate to NSPE, and eventually as NSPE SE Region vice president. He had encouraged me to become involved in the Florida Engineering Foundation during its infancy and got me appointed as a trustee, a position I remained in for 28 years. I could think of no more fitting memorial to his love for the profession than to establish a scholarship fund in his name with the FES. Thus began the FES David F. Ludovici Scholarship, which continues to this day.

Testimonials I received in the past few days via email:

“I was fortunate to have many, many friends in my 30 wonderful years working for the engineering profession, but few were closer than Henn. He was the consummate professional and the engineering community as well as the public he served through engineering is far better because of him.” – Dennis Barton, former FBPE executive director

“I adored Henn for all the attributes you describe and his quick smile and good sense of humor.” – Kim DeBosier, PE, and a former FEMC director

“There wasn’t anybody who had more of a love for the engineering profession…backed up with involvement and action…He was a driving force during his time on the FBPE…He was truly one of Florida’s great engineers.” – Don Goddeau, PE, and a FEMC director

“The House of Representatives warmly congratulates Henn Rebane for his many accomplishments as a citizen, a Professional Engineer, and a civic volunteer and extends to him its gratitude for his numerous contributions to the State of Florida.” – House Resolution 9039 (in 2008) sponsored by Rep. Stephen Precourt, PE

As we set up the Ludovici Scholarship, I reflected on the one I won in 1974, and I realized that I could recall nothing about John Bedingfield. Who was he? What did he do that warranted this honor? I started asking people. Dave was gone, as were almost all of the engineers I know who were active leaders in 1974. No one knew him. It remained a mystery.

A few years later, my wife and I were strolling through an antique store (before eBay took the fun out of those treasure hunts). I was attracted to an old, framed patent drawing, but the price tag was too high for us at the time (college tuitions again, this time for our kids). However, I noticed that the patent had been awarded to John Bedingfield in Atlanta, and it was for some sort of mechanical device. A new clue. Alas, search engines and their databases were still in their infancy and internet searches for the name turned up nothing. The mystery continued.

During the early to mid-2000s, the relationship between FBPE and FES became somewhat rocky. A concerted effort was made by leaders in FES to improve FBPE representation and operations. Henn was our biggest advocate on the Board. He served as FBPE chair during my term as FES president in 2006. I so admired Henn’s service, that I named him as recipient of my President’s Award.

The following year, I nominated Henn as an NSPE Fellow. In the process of assembling the documentation for that nomination, I reviewed Henn’s bio. There it was! One of Henn’s early employers was Bedingfield and Associates. Could it be? I emailed Henn. Here is the rest-of-the-story in Henn’s own words:

“John Bedingfield was the mechanical engineering department head at Watson & Co. in Tampa. He and his assistant Glenn Logsdon quit in 1960 and formed Bedingfield & Associates — mechanical engineers, working for local architects. They were successful and were looking for an EE so they could offer MEP services. I was living in Cocoa Beach working for Brown Engineering of Huntsville, Ala. – a body-shop furnishing engineers for temporary assignments at NASA. I was also moonlighting doing small electrical design projects for a local engineer. A sales rep put John B. and I together, and I moved to Tampa in 1961.

“John B. was very active in FES… (He and some other) engineers organized CEC/Florida and became the affiliate of the national CEC (now ACEC). John was the president of CEC/FL.

“I liked the man a lot. He was passionate about the consulting engineering profession, and a very hard worker. It was in June 1967, I was leaning on the door jamb of his office and John was on the phone. He had a heart attack and died that day. We were adequately funded with buy-sell insurance. Glenn Logsdon and I then funded the scholarship, with contributions from several other CEC/FL firms. Glenn did not want to continue the business with me, and I took over the firm. I had been active in CEC/FL as well and was its last president when CEoF and CEC/F merged into FICE. I do not recall the details, but the Bedingfield name was associated with the fund until it ran out of money, or was transferred to the FES or FICE scholarship fund.

“Norma Jean and I will drink a toast to a good engineer who left his mark on the profession. Actually, I think we’ll toast both Dave L and John B with this sentiment. You might do the same. It is wonderful to know that a scholarship created in memory of an engineer assisted in drawing another good man to the profession who is motivated to do his part — and so on. Thanks for asking the question.”

As engineers, each of us is a beneficiary of those who have gone before us. The technical work we do every day is the application of generations of contributions to the engineering body of knowledge. Likewise, as volunteers, we maintain and build on programs established by some who have long been forgotten. John Bedingfield’s legacy might have been forgotten, but for Henn’s efforts, just as now, there are fewer and fewer who remember Dave.

So let’s drink a toast to my friend Henn, and let’s establish a scholarship in his name. I’ll contribute. Will you?