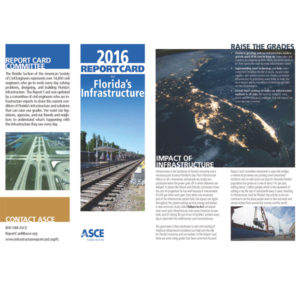 The Florida Section of the American Society of Civil Engineers (ASCE) released its 2016 Report Card for Florida’s Infrastructure, grading 11 categories of the state’s infrastructure, resulting in an overall grade point average of “C.”

The last Report Card for Florida’s Infrastructure, released in 2012, gave the state’s infrastructure a GPA of “C-”.  The Grading Scale is as follows:

Over the past 5 years, Florida’s population has grown at a rate of about 1% per year, adding about 1 million people. This is the equivalent to adding a city the size of Jacksonville every 5 years and makes Florida the fourth fastest growing state in the nation.

As a top destination, more than 50% of Florida’s commercial airports will experience demand levels that will surpass their operational capacity over the next 15 years.

Given these infrastructure challenges, the Florida Section of the American Society of Civil Engineers urges a number of recommendations to raise the grades, including:

The Report Card for Florida’s Infrastructure was created as a public service to the citizens and policymakers of the state to inform them of the infrastructure needs in their community. By using school report card letter grades, civil engineers use their expertise to condense complicated data into an easy-to-understand analysis. Now that the report card has been updated, a copy can be found on the ASCE Florida Section website, www.fla-asce.org.