The redevelopment of the Cascades area, is a multi-million-dollar project that entails a greenway plan for a 5.2-mile corridor through downtown Tallahassee. The park details consist of planning for trails, park, and greenway amenities in combination with a stormwater retrofit master plan. 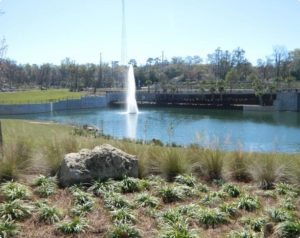 On occasion FBPE has an opportunity to visit current engineering and construction projects in Florida, and most recently, FBPE staff were able to visit the renovation and redevelopment of what will be Tallahassee’s new Cascades Park.

The park, listed on the National Register of Historic Places, was once home to a beautiful waterfall, discovered in 1823 when two delegates — one from St. Augustine and one from Pensacola — were looking for a suitable location for Florida’s state capitol. The area of the park was also once the location of Smokey Hollow, an African-American community from the 1890s until it disbanded in the mid-1960s due to urban renewal throughout the city. Centennial Field, built in 1924 for Tallahassee’s 100th anniversary, could also be found there, and for 50 years was used for minor league baseball games, football games, and high school graduation ceremonies. Florida State University’s first three football seasons, from 1947 and 1949, were played there.

When contamination was found in 1988, much of the area was closed to public access until a major cleanup began in 2005. Four years later, after being deemed contaminant free, work began redeveloping the property for what will soon be Cascades Park.

The project that began in 2009 is being spearheaded by Blueprint 2000, a city-county agency that handles infrastructure improvements. The park will be the centerpiece of downtown Tallahassee extending from the north area of Pensacola Street to the southwest of Monroe Street, and consist of 24-acres serving a dual-purpose for the area.

First, the park is designed to flood during major storms, which will provide much-needed flood relief upstream and downstream from the park. The stormwater component is funded through the penny sales tax that was approved by voters in 2000, while many of the park amenities currently under construction have been funded through grants and donations totaling approximately $6.1 million.

Second, the park will serve as a premiere recreational and entertainment green space for the Tallahassee community and visitors.

The park, which is scheduled for completion in the fall  2013, will include 2.3 miles of biking and walking trails, an outdoor amphitheater with beautiful landscaping and ponds. An interactive fountain choreographed to colored lights will be a focal point for the park, as well as a fence featuring interpretive historical panels that outline Tallahassee’s past. Numerous amenities will commemorate local places and events to include the former Cascades waterfall, which will be represented by an ultra-modern cylindrical fountain. The Prime Meridian will be showcased in a granite map of Florida surrounded by the 160-ft diameter amphitheater stage with a seating capacity of 4,000. The city’s Korean War memorial and tribute to the Smokey Hollow community will also be featured.

You can find out more information on the new Cascades Park development by visiting cascadespark.org.

To view detailed information, park feature renderings, and to learn more about Blueprint 2000 and its current initiatives, go to its website at blueprint2000.org.

For a visual peek into Florida and Tallahassee’s past history, go to Florida’s Division of Information and Library Services’ Florida Memory page at floridamemory.com.