Building a Solid Foundation: Why Being an Ethical Engineer Matters 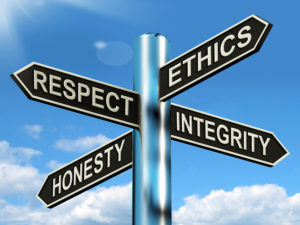 While I am not an engineer, I have heard it said that laying the foundation for a building takes up a vast majority of the project time and budget. There is good reason for this: A strong foundation is the key to a sturdy, well-built building. A good engineer knows they have one chance to lay a foundation properly. A great engineer understands that the results of laying an improper foundation can be disastrous, putting the whole project, as well as the public, at risk.

Engineers in Florida are regulated by two Florida Statutes, Chapters 455 and 471. Chapter 455, F.S., contains a number of laws applicable to all practitioners under the umbrella of the Department of Business and Professional Regulation (DBPR), including general grounds for disciplinary action against all DBPR licensees. Chapter 471, F.S., contains regulations that apply only to engineers in Florida. This chapter is usually called the “Florida Engineering Practice Act,” and fulfills several key duties. First, it provides the requirements for licensure as a Professional Engineer in Florida. Second, it creates the Board of Professional Engineers (BOPE) and grants the BOPE the authority to promulgate rules. Third, it provides the grounds for disciplinary action against a Professional Engineer. In addition to the Florida Statutes cited above, the BOPE Rules, found in Chapter 61G15, Florida Administrative Code, contain all the rules promulgated by the BOPE, including grounds for disciplinary proceedings and disciplinary guidelines.

It is important to note that engineering is a “profession,” as opposed to a job or occupation. As such, it requires education, skills, judgment, and the exercise of discretion. Most engineering Codes of Ethics stress that engineers shall hold paramount the safety, health, and welfare of the public. This means that ethics in engineering is a broad professional concern, rather than simply a personal concern. Indeed, the definition of “engineering” in Section 471.005(7), F.S., specifically describes a number of services and activities “insofar as they involve safeguarding life, health, or property.” Engineers may at times be pressured to “think like a manager, not an engineer,” especially when working for a non-engineer. However, “the boss made me do it” is never an available defense, and may subject you to discipline for misconduct or for negligence in the practice of engineering.

Understanding the sources of engineering law is critical when examining the ethical issues engineers face. Some of the most common ethical issues are the acknowledgment of mistakes, conflicts of interest, product and project safety, responsibility arising from actions of others, whistle-blowing, cutting corners, and plan-stamping. When examining these ethical issues, it is important to start from the ground up. To begin, ethics is at its core the study of the moral principles that govern the conduct of individuals or groups. More specifically, engineering ethics are the rules and standards that govern the conduct and interactions of engineers as professionals. Most engineering societies and associations have a “Code of Ethics.” These codes are usually stated as general principles and almost never describe specific factual situations. Instead, they serve as a starting point for making ethical decisions. Take time to examine the Code of Ethics provided by your engineering society or association, and feel free to research the Codes of Ethics of other societies and associations for comprehensive study.

When looking for Codes of Ethics or Fundamental Principles in engineering, one does not have to look far. For example, the Fundamental Principles of the American Society of Civil Engineers (ASCE) state that “engineers must uphold and advance the integrity, honor and dignity of the engineering profession.” This is accomplished by having engineers use their knowledge and skill for the enhancement of human welfare and the environment; by being honest and impartial and serving with fidelity the public, their employers and clients; by striving to increase the competence and prestige of the engineering profession; and supporting the professional and technical societies of their disciplines. In addition to their Fundamental Principles, the ASCE has Fundamental Canons, which state that, among other things, engineers shall hold paramount the safety, health, and welfare of the public, and shall strive to comply with the principles of sustainable development in the performance of their professional duties; that engineers shall perform services only in areas of their competence; that engineers shall issue public statements only in an objective and truthful manner; and that engineers shall act in professional matters for each employer or client as faithful agents or trustees, avoiding conflicts of interest.

It should be noted that the National Society of Professional Engineers (NSPE), the Institute of Electrical and Electronics Engineers (IEEE), and other engineering organizations also have Codes of Ethics, which state very similar principles as the Fundamental Principles and Canons of the ASCE. Needless to say, there are several ethical principles that permeate through the various engineering organizations, several of which touch directly on the common ethical issues engineers face.

The legal principle that ties these Codes of Ethics and Fundamental Principles to the law regulating engineers is due process. Due Process is afforded to every engineer in Florida, and every licensee in Florida for that matter. Due Process requires that the laws and rules that may be used to discipline a licensee provide reasonable and meaningful notice to licensees of the conduct that is prohibited. Therefore, any behavior that is not explicitly listed in the laws and rules as grounds for disciplinary action cannot (should not) be used by the BOPE to support discipline. Even though engineers should always strive to take the most ethical approach possible, it should be noted that an engineer cannot be disciplined for being “unethical,” or for violating a provision of an ethics code. However, many ethical situations are covered under the Board’s definition of misconduct in Section 61G15-19.001(6), F.A.C. Therefore, abiding by the Code of Ethics adopted by your engineering society of choice will more often than not keep you from running afoul of the BOPE’s Rule on misconduct.

The definition of “misconduct,” found in Section 61G15-19.001(6), F.A.C., is multi-faceted and contains several examples of what is considered by the BOPE to be misconduct. These definitions of misconduct have ethical counterparts which can be found in the various Codes of Conduct and Fundamental Principles. For this article, four definitions of misconduct and their Code of Conduct counterparts are listed, but there are many more of both. It is the duty of the engineer reading this article to conduct independent review of the engineering laws and rules, as well as various Codes of Ethics and Fundamental Principles.

According the BOPE Rule found in Section 61G15-19.001(6), F.A.C., misconduct includes expressing an opinion publicly on an engineering subject without being informed as to the facts relating thereto and being competent to form a sound opinion thereupon. This example of misconduct fits neatly beside the statement in the NSPE Code of Ethics, which states: “Engineers shall issue public statements only in an objective and truthful manner.”

Another definition of misconduct in Section 61G15-19.001(6), F.A.C., is being untruthful, deceptive, or misleading in any professional report, statement, or testimony whether or not under oath or omitting relevant and pertinent information from such report, statement or testimony when the result of such omission would or reasonably could lead to a fallacious conclusion on the part of the client, employer or the general public. Again, this is covered in the NSPE Code of Ethics when it states that engineers should “Avoid deceptive acts.”

Misconduct is also defined as performing an engineering assignment when not qualified by training or experience in the practice area involved; or affixing a signature or seal to any engineering plan or document in a subject matter over which a professional engineer lacks competence because of inadequate training or experience. As per the NSPE Code of Ethics, engineers should only “Perform services only in their area of competence.”

The last example of misconduct that will be provided states that a professional engineer shall not knowingly associate with or permit the use of his name or firm name in a business venture by any person or firm which he knows or has reason to believe is engaging in business or professional practices of a fraudulent or dishonest nature. According to the NSPE Code of Ethics counterpart, “Engineers shall not use association with a non-engineer, a corporation or partnership as a ‘cloak’ for unethical acts.” In addition, the ASME Code of Ethics states that “Engineers shall associate only with reputable persons or organizations.”

In order to develop a sturdy ethical foundation, there are several questions an engineer can work through when presented with an ethical dilemma. First, if the action in question is ethically or legally wrong, simply refrain from performing that activity. Second, you must always ask if the action in question complies with your values as an engineer. If it does not, that is a potential red flag to consider. Third, do not be afraid to ask how the action will look to other engineers. Peer pressure is not always a bad thing, especially if it helps build strong ethics. Finally, if you would feel bad by doing the action, you may want to stop and ascertain why. Do not be afraid to consult with close colleagues, or even an attorney, for particularly troubling or borderline issues. Remember, Rome was not built in a day, and neither will the ethical foundation on which you should build your engineering practice.

Edwin Bayó is a former Counsel to the Florida Board of Professional Engineers. He is Board Certified in State and Federal Government and Administrative Practice by the Florida Bar.